With so much happening at The Myrtles Plantation, you've got to check out our blogs of the latest events and findings.

Posted by Myrtles Plantation on October 17, 2019

Alongside featured chefs’ stations, the St. Francisville Food & Wine Festival is proud to be showcasing a cheese and charcuterie station by ​ 3Tails Wine & Cheese​ ​of Baton Rouge, LA; a Louisiana oyster bar presented by the ​Louisiana Seafood Promotion & Marketing Board​, ​and a menu of creative cocktails showcasing unique spirits by New Orleans’ own ​Seven Three Distilling Company​.

Between the dishes and drinks, festivalgoers will get to explore The Myrtles property inside and out, test their aim at an all-day ​boccé competition​, and hear concerts by live Louisiana bands including  the legendary ​Steve Riley & the Mamou Playboys​.

“In 35 years of covering the culture of Louisiana and Mississippi for ​Country Roads, we’ve discovered so many spectacular places, met crazy talented chefs, and been blown away by bands as creative and exciting as any in the world,” said James Fox-Smith, publisher of ​Country Roads
​ magazine. “With this festival, we want to bring all these good things together in one, uniquely beautiful place. There’s no better place to do that than at The Myrtles Plantation in St. Francisville.”

* A portion of proceeds from The St. Francisville Food & Wine Festival will benefit the ProStart® program at West Feliciana High School. ProStart® is a nationwide, two-year culinary arts and restaurant management program for high school students that develops the best and brightest talent into tomorrow’s restaurant industry leaders.

The St. Francisville Food & Wine Festival is presented with generous support from these sponsors:

Restaurant 1796 is thrilled to announce Executive Chef, Daniel Dreher and Chef de Cuisine, Austin Egan. With each their own extensive set of training and restaurant experience, together they bring a sense of collaboration and experimentation to our menu—all in hopes of achieving one single, precious goal. 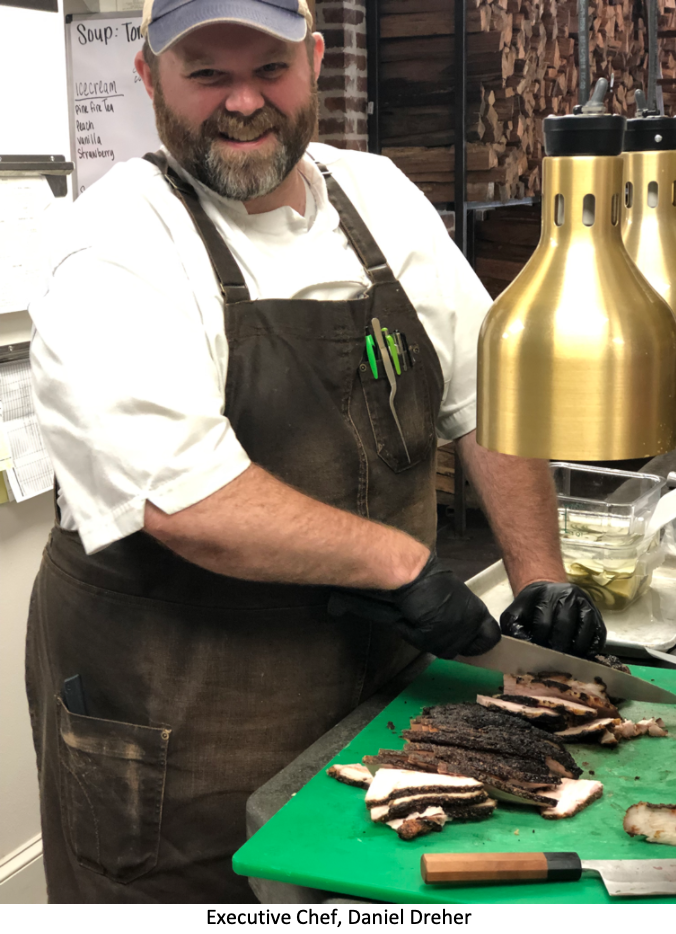 Dreher described it: “It’s that moment when you bring something to someone to try for the first time. When they take a bite, and just sit back and you can see it on their face, right there and then. Like ah, this is so good.”

“I chase that reaction,” said Egan.

The first seeds of this passion were planted during Dreher’s two years working at The Magnolia Cafe, where he made the decision to attend the Chef John Folse Culinary Institute at Nicholls State University. There, his fate was sealed. “I fell in love with it,” he said. He left Nicholls in 2006 with a degree, and a fiancée too.  In the following years, he worked at a number of restaurants and under a number of different chefs—the most influential of which was Chef Bryan Carr in St. Louis, Missouri. “He was like a father figure to me,” he said. “Just really kind and passionate, really cared about making great, simple food.”

Dreher then went on to open up Fresh Kitchen in Baton Rouge, a healthy prepared-meals business, which he and his co-founder Ryan McNeil sold to Lafayette’s Good Eats Kitchen in December 2018—perfect timing for him to join the team at Restaurant 1796, which we opened in early 2019.

“It’s weird,” he said. “It’s like it’s always been a dream of mine to work at a nice restaurant in St. Francisville. Growing up, if you wanted to do something, you had to go to Baton Rouge. It’s just nice having this in our backyard, seeing people come in who’ve known me since I was a little boy.”

For Egan, who spent his first eight months in St. Francisville commuting to Baton Rouge’s Ruffinos, the Myrtles’ new restaurant was almost too good to be true. “In this little out of the way town in Louisiana, somehow we’ve managed to get so many qualified people in the kitchen,” he said. “When I got here I was like, ‘What are you all doing out here?’ There is definitely like some higher power whisking everything into this little spot so we can do some really cool stuff.”

Egan cut his culinary teeth in high school in Ocala, Florida at the Marion Technical Institute—through which he competed in the Skills USA Culinary Arts Competition in 2011. “I actually cut the tip of my finger off like halfway through it, but I really wanted the scholarship they were offering,” he said. “It was the only way I could afford culinary school. I needed stitches, but I just got some masking tape, taped a glove onto my hand, and threw everything I had been cooking away. I started over and still finished in time, and won the competition.” A recruiter offered him a scholarship that day. 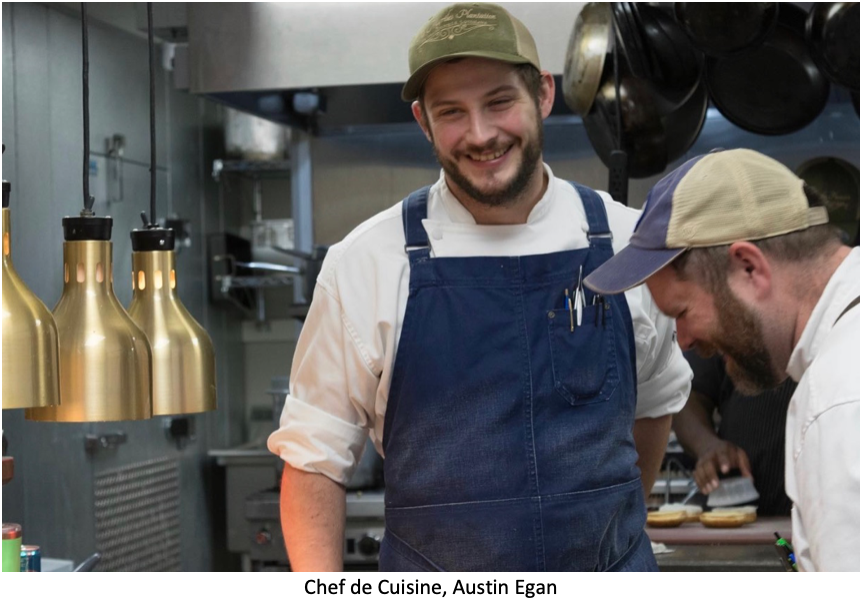 Egan finished high school early, packed his bags, and two weeks later moved to New York City to attend the Culinary Institute of America. “I was the kid who just read cookbooks, absorbed everything I could,” he said. “So when I got to this place, where the best of the best in the industry are, I just soaked it all up.”

For his externship in the program, Egan worked at Ralph Brennan’s Red Fish Grill in New Orleans, where he returned years later to work as a sous chef. After starting his family, he decided to make the move out of the city to St. Francisville. In late 2018, he joined the team at Restaurant 1796.

Both men have worked for the past five months under Chef Ben Lewis, who left Restaurant 1796 in May. The two credit him as an active force in establishing the high concept experience of the restaurant. “Me and Dreher, our cooking styles are very European,” said Egan. “Ben’s experience in the Virgin Islands brought in totally different influences. I was really forced to go outside of my comfort zone, use different spices. I really enjoyed the idea of making classics in a totally new way.” Dreher agreed: “He taught me a lot in a very short time.” 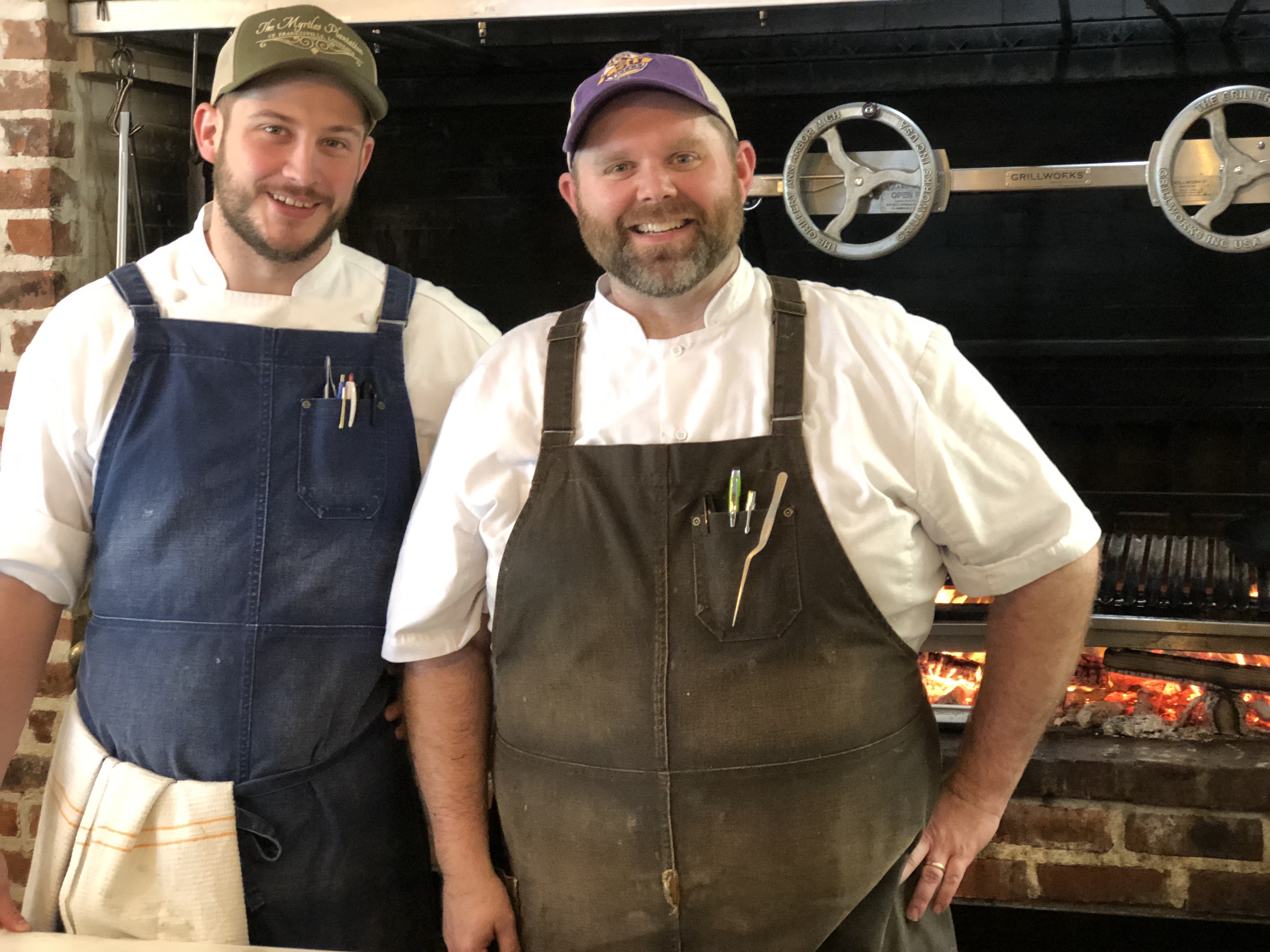 Now leading the kitchen themselves, Dreher and Egan both walk around with notebooks in hand. “We’re constantly writing ideas down, stuff to play with for the menu,” said Dreher, whose cooking philosophy is drawn from Chef Carr—less is more. “I’ll put my ice cream up against anybody,” he said. “It’s just eggs, sugar, cream, and flavor if you want—all about technique and ratios. There’s nowhere to hide.”

For his part, Egan approaches cooking from a standpoint of taking classics, and twisting them on their head. “I like reading old recipes, traditional dishes that aren’t always used anymore—or stuff that is overly popular, and doing my own thing with it.”

Going forward, the two chefs plan to each come together with their ideas—as well as the ideas of their fellow cooking staff—and to experiment, see what can happen, and keep it all fresh.

“The menu is going to change all the time,” said Egan. “Even things we like are going to make way for something new. We want people to try new things, to get excited about food with us.”

“It’s that look on your face that we’re after, just knowing that our food has made someone happy,” said Dreher.

The Myrtles Plantation - Something for Everyone

A moss-draped icon clothed in Southern legacies of history, tragedy, and the paranormal, the Myrtles Plantation has been drawing visitors to her stained glass, evil-thwarting front door for generations. And while gnarled live oaks and the giant front porch rockers of the pre-Civil War era mansion are certainly a draw for some of our 60,000 annual visitors, the main drawcard has, for years, been our haunted history—its status as one of the “Most Haunted Homes in America”. In short, people come here to meet our resident ghosts.

In recent years though, General Manager Morgan Moss—who grew up on the property—has overseen a slow shift in focus for the Myrtles. “The spirits are integral to this place,” says Morgan. “And we don’t want to abandon them (as if we could!) or to abandon that history. But there is so much more that this property holds, and so much more that we can offer through it.”

In 2019—after a season of rejuvenation following a 2017 fire that destroyed the on-property restaurant, the Carriage House —renovations, charming new accommodations, a new high-concept restaurant, and more new offerings have extended our deep-steeped appeal to overnight guests, day-trippers, discerning locals, and destination diners, too. And while the ghosts are still as alive (ish) and haunting as ever, we are no longer a destination for paranormal thrill-seekers alone.

Perhaps the single most impactful element of the Myrtles’ evolving focus is our new in-house dining establishment Restaurant 1796. The Southern-inspired, woodfire-infused cuisine is singular in approach and design, and elevated by a commitment to using the freshest local ingredients available. The cozy, A. Hays Town-style building is built around an iconic, 10-foot-wide wood-fired hearth, across which every dish passes. We pride ourselves on being innovative and yet comfortably approachable with a menu of creative craft cocktails offered across a swooping bar that spans the length of the dining room. Check the seasonal menus at myrtlesplantation.com/restaurant-1796.

For History Buffs
Daily and private tours orchestrated by skilled storytellers and historians invite our visitors to explore the significance and the secrets of the circa-1796 mansion, and the families that lived (and died) here. Wandering the halls and the grounds of this historic home offers layer upon layer of South Louisiana’s complex social, agricultural, architectural, and racial history.

Whether your escape be a quest for adventure or for respite—a night or two with us promises high end comfort in one of the property’s eighteen recently updated accommodations. Guests can enjoy historic charm and modern luxury in the bedroom of the home’s original founder, in the Caretaker’s Quarters, which were once featured on the popular reality TV series Ghost Hunters, or in one of several new Garden Rooms upstairs from Restaurant 1796. All overnight guests are treated to a gourmet breakfast as well as a complimentary Mystery Tour.

Adjacent to Restaurant 1796, we have recently opened a handsome new event space – the Bayou Room – which is available for custom private events ranging from bridal and baby showers to corporate meetings, rehearsal dinners and birthday parties.

In the coming months, expect more opportunities for guests and local engagement coming to the Myrtles. Some things to look forward to include a specialized Sunday brunch menu, an on-site kitchen garden, and a series of in-house events such as paired wine dinners, guest chef appearances, workshops, live music and more.

Yes, while the Myrtles’ reputation as one of America’s most haunted homes remains firmly intact, our magnificent property is evolving into a destination for a whole series of other memorable experiences, too. “For me,” says Moss “this property is a place for exploration, a place to stay, a place to learn, to be entertained, to eat, to relax, and to enjoy. And that’s what we want the Myrtles to be for you, too.”